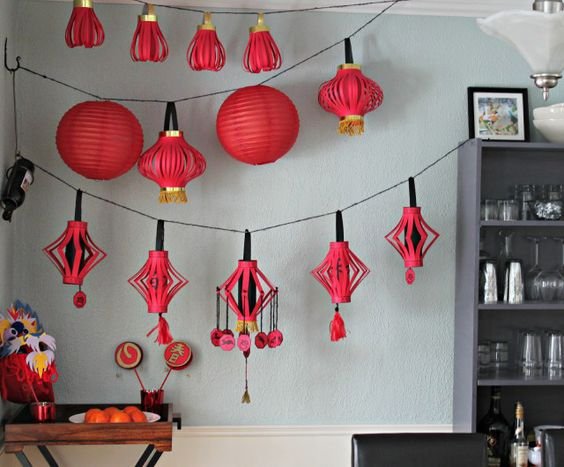 This year, Chinese New Year comes on February 16th. Not only is it a great excuse to celebrate with a fun craft or activity, but it is also a great way to celebrate and learn about another culture.

So, what exactly is Chinese New Year?

If you’re going to be teaching your kids about it, you should definitely know a few things first. The Chinese New Year is based off the lunar calendar. Or in other words, how long it takes the moon to travel around the earth.  The celebration lasts for 15 days and is a major Chinese holiday. If you already know all the facts and are looking for some ways to celebrate with your kiddos, head on over to our Pinterest page to get some ideas. If you’re looking for the facts, then keep on reading for 15 facts about Chinese New Year:

1. Families usually have a reunion dinner the night before the festivities begin.

2. The Chinese New Year is a common time for spring cleaning as a symbol of letting go of the past and welcoming a new year.

3. Every year, the Chinese New Year is named after an animal. This year is the year of the dog.

4. During the festival, it is common to set off firecrackers to scare off evil spirits.

5. It is also common to see street fairs and festivals where people are dancing in the streets dressed as lions or dragons.

6. Instead of presents, kids get red envelopes filled with money.

7. The decorations include lots of red lanterns, dragons, orange and mandarin trees, and plum blossoms.

8. It is typical for kids to take a whole month off from school as their long winter vacation.

9. There is a lot of traveling during the Chinese New Year celebration because most people are visiting their family or friends.

10. The date of Chinese New Year always varies year to year. Depending on the lunar calendar, it will always fall between January 21st and February 20th.

11. At midnight at the start of Chinese New Year is the world’s biggest firework display. (Fun fact: China produces about 90% of the fireworks out there in the world!)

12. While spring cleaning is common around this time, you will not see the Chinese sweeping, taking out garbage, or washing their hair or clothes on the first two days of the new year because it is considered bad luck. They consider it “sweeping out your wealth” or “washing one’s fortune away.”

15. The last day of the festival is called Lantern Festival. People will walk the streets with glowing lanterns, send them into the sky, and let them float on seas, rivers, and lakes.

The Chinese New Year is a world-wide celebration. It is a great way to introduce a new culture to your child and a fun way to celebrate with some crafts and a little dancing. Now that you know what Chinese New Year is all about, head on over to our Pinterest page to get some ideas for fun crafts and things to do with your kiddos.