How Much Screen Time Should Your Kid Have? 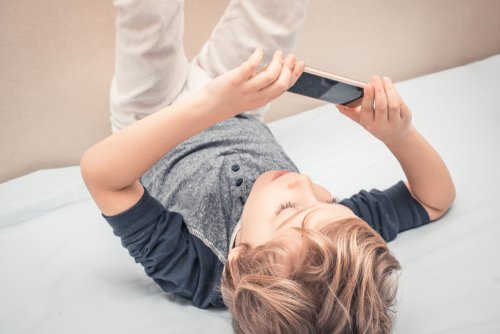 We’re here to talk about the question everyone’s asking:  How much screen time is too much?

We all know how easy it is to get stuck behind the screen. We click this link that leads to this and that, and by the time we come back to reality, we’ve spent 30 minutes scrolling without realizing it. It gets the best of us—and our kids. Whether they’re six or six months, technology is something they engage with daily.

Why should you limit it?

Screens are hard to escape. Screen time is actually proven to release dopamine in the brain, so it’s no wonder we’re reaching for our phones all day. And, as a parent, it can be so tempting to slip a screen in front of a child so we can get some stuff done, pass the time on a road trip, or keep them calm in a public place. Limiting screen time isn’t about throwing away your TV and selling the iPad. It’s about using it in moderation.

By the age of three, your child’s brain is 80% developed. Because of that, limiting screen time with kids three and under is important. In those early years, your child is learning so much in terms of physical and emotional development that they can’t learn from a screen. The leading organization of pediatricians has recommended that children under 2 years old not have screen time unless it is alongside an adult who is sharing the experience with them.

When they are young, children learn in the context of a relationship. Their brains create connections as they relate with other people; the back and forth interactions are essential to helping infants and toddlers make sense of the world. They also develop oral language (which is the foundation of reading and writing) as they first babble, and then talk to a responsive adult who responds in kind. Neither of these aspects of brain development can be replicated by a screen and could actually stunt the progress of these crucial elements.

Your child’s brain isn’t fully developed until they’re around 25, so encouraging activities and hobbies beyond the screen is going to help create long-term, good habits.

How much is too much?

Studies vary, but the American Academy of Pediatricians suggest one hour of “high-quality” screen time a day. Does that include the 15 minutes your toddler has your phone at the grocery store to keep them entertained? We’re not keeping score. But excessive screen time can affect their sleep, health and mood. Keep an eye on them. If you had a hard time putting them to bed, think about how much screen time they had that day. And if you think that’s the cause, make adjustments accordingly.

We understand that telling your teenager they can only spend an hour on their phone is probably not going to go over so well. So, we might sound redundant, but that’s why encouraging other, more positive activities early is so important.

Where do you start?

Start with yourself. If you’re always on the phone, make it a point to turn on “Do not disturb” for an hour or two when the kids are home. Use that time to take them outside or to play a game. If you need some inspiration for things to do, we put together a list of indoor activities for kids when the outdoors are too cold or rainy. Spoiler alert: There’s some screen time on there that encourages them to get active.

There are tons of great resources on your phone to help you limit your screen time (ironic, we know). A great one to start with is OurPact. OurPact makes it easy to schedule your screen time, and letting your kids schedule their own screen time, makes it a little easier when it’s time to turn it off. Subsequently, if you scheduled time for homework, you can limit usage of other apps during that time.

Is there such of thing as good screen time?

Of course! While studies vary on the amount of time kids should spend on a screen, studies pretty consistently prove that the content of the screen time has a big effect on behavior. Putting in a little research on educational games and shows is worth the effort. But not all of the screen time has to be educational. Just be aware of what they’re consuming. If your child is having specific behavioral issues, pay attention to what they’re watching, because they could likely be picking it up from there.

Taking a step back from the screen is important for development in all ages. We all have those days, where it’s raining outside or we’re running extra low on energy. So, set screen time restrictions that make sense for your family.